In the Cleveland Park Historic District, buildings built between 1880 and 1941 have the full protection of the District of Columbia’s historic preservation ordinance, the Historic Landmark and Historic District Protection Act (1978). Those built in 1942 or after do not. Thus a house built in 1941 “contributes” to the historic character of the neighborhood; a house built in 1942 or later does not and is “noncontributing.” How did this situation come about, and what does it mean for Cleveland Park’s architectural legacy and sense of history?

The National Register of Historic Places recognizes buildings, sites, and districts for their historic significance, and requires that that significance be associated with a discrete chronological period: the period of significance. A historic place may have multiple periods of significance, but those periods must be strictly demarcated by year.

The National Register also has a rule of thumb—often treated as   a hard-and-fast rule, though it was never intended to be that—that places can only be listed if they “achieved significance” more than 50 years ago. Listing properties younger than 50 years old requires demonstrating that they are of “exceptional import-ance.” (There is a lot of debate in the preservation community about what that means.) A historic district whose development stretches into the period more recent than 50 years may be listed without having to meet the “exceptional importance” standard, but only if the preponderance of its buildings meets the 50-year guideline.

The “present” from which we measure 50 years in the past is of course not now, but the time when the district was nominated to the National Register. In Cleveland Park, that vantage point is the mid-1980s, when the Park & Shop on Connecticut between Ordway and Porter was threatened with redevelopment, and the founders of CPHS moved to protect the neighborhood commercial corridor—and the neighborhood to which it belongs—by nominating Cleveland Park for both National Register and local D.C. historic status. The 1941 terminus for our period of significance is thus determined not only by a scholarly analysis of the history of Cleveland Park, but by the limits imposed by the slightly-elastic 50-year rule at the time of nomination.

The end of Cleveland Park’s period of significance, 1941, is associated with World War II, and it marks the last year until after the war in which there was any substantial new building in the neighborhood. The year 1941—45 years before 1986, when the process of nominating our historic district began—also represents a stretching of the 50-year guideline to encompass as many properties as was feasible at that time. When CPHS’s founders nominated Cleveland Park to the National Register, their first aim was to protect the Park & Shop and the rest of the Connecticut Avenue commercial strip from redevelopment. Extending the period of significance to 1941 allowed them to include as much of the neighborhood as possible among the “contributing,” and thus protected, resources. That was especially important for protecting Art Deco buildings on the Connecticut Avenue strip, like the Uptown Theater (1936) and the Macklin (1939).

Resisting the segmentation of our history

The National Register criteria require drawing hard-and-fast chronological lines across the history of a place, a history that most people living in that place experience as continuous. The preservationists who nominated Cleveland Park to the National Register in 1986 repeatedly resisted the requirement to draw a chronological boundary between significant and insignificant, historic and non-historic, in Cleveland Park. The nomination itself says:

There are no intruding buildings within the boundaries of the Cleveland Park Historic District. Significant compatible structures, which are an integral part of the district, have continued to be designed and built up to the present. However, according to the National Register’s criteria all of the post 1941 additions to the district have been deemed to be noncontributing structures because of their age.

These and similar statements throughout our National Register nomination and in the early minutes of CPHS’s Architectural Review Committee point to the nominators’ feeling that the historical distinctions required by the National Register were a falsification of the way residents understood their neighborhood’s history.

What does this mean for Cleveland Park’s buildings?

Contributing and noncontributing buildings are treated differently under preservation regulations.

Projects affecting contributing buildings are reviewed for their impact on the building’s historic fabric and design integrity—its ability to communicate the characteristics of the period in which it was originally built—as well as for the impact of the alteration on the historic district as a whole.

Alterations to noncontributing buildings, on the other hand, are reviewed only for how they would affect the historic ensemble of the district, not for their effect on the design or material integrity of the building in question. Noncontributing buildings are thus subject to alteration that completely changes their character, and there is no significant legal obstacle to tearing them down.

Moreover, noncontributing buildings are understood to have nothing to say to the design history of the district, and thus cannot be taken as precedent for any new construction. Over time, preservation review can allow noncontributing buildings     to be remodeled to look more like those from the period of significance, or replaced altogether. In effect, buildings outside  the period of significance are in danger of being written out of   the neighborhood’s history. Their noncontributing status may have made sense at the time the neighborhood was designated historic, but that status also means they may not survive with their fabric and design intact long enough to be reevaluated by a later generation.

So what does this mean on the ground for preservation in Cleveland Park?

There is no question that Cleveland Park is predominantly an early-20th-century neighborhood. In our National Register nomination, only 68 buildings out of about 1000 are listed as noncontributing on the basis of age. Razing of noncontributing structures has not to date been a significant issue in the historic district—though generational turnover in our housing stock is creating significant pressures to enlarge and alter older houses. The administrative necessity of a strict chronological cutoff for contributing status creates some absurdities and frustrations. Here are three examples:

part of neighborhood history the existing library is. The library feels like an integral part of the Connecticut Avenue neighborhood-serving commercial district that the historic designation of Cleveland Park was designed to protect. It’s been around for 65 years now. But since the library was built in 1952-53, it is a noncontributing resource, which means that our preservation law is no bar to its demolition.

Pre- and postwar houses by the same architect

Houses by Carl I. Johnson: the one built in 1936 (left) is a contributing resource; the one from 1947 (right) is noncontributing.

The architect and developer Carl Iver Johnson build approximately thirty houses in Cleveland Park between the 1930s and the 1950s. Almost all of them are very simple brick colonials with applied Federal or Georgian-style detail around the doorways. They are certainly a part of Cleveland Park’s history, since Johnson was such an energetic in-filler of lots before and after World War II, but none of them would strike us as distinctively characteristic of Cleveland Park.

Of Johnson’s houses, for example, 3019 and 3029 through 3041 Ordway Street were built in the late 1930s, and so are contributing resources in the historic district. The 3021 and 3025 Ordway houses were built after the war, so they are noncontributing. On Porter Street, a trio of Johnson’s houses (3063 through 3069) were built in 1941 and thus are contributing; an application to add a porch to one of those houses was recently denied. But directly across the street from those houses is a 1950 house—noncontributing—whose demolition was approved last year. The ordinary resident of Cleveland Park could be forgiven for wondering what the distinction really is between a prewar and a postwar modest brick colonial on the same block, especially in cases where they were both built by the same man.

The blocks abutting the west end of Rosedale, on 36th Street and around the corner on Ordway near 36th, are full of houses built by the Faulkner family of architects, whose history is entwined with that of Rosedale itself. The houses designed by Waldron Faulkner in the 1930s are contributing resources. Those of his son, Winthrop, built between 1963 and the late 1970s, are not. What would it mean for a complete architectural history of Cleveland Park if Winthrop Faulkner’s houses were erased from the record? 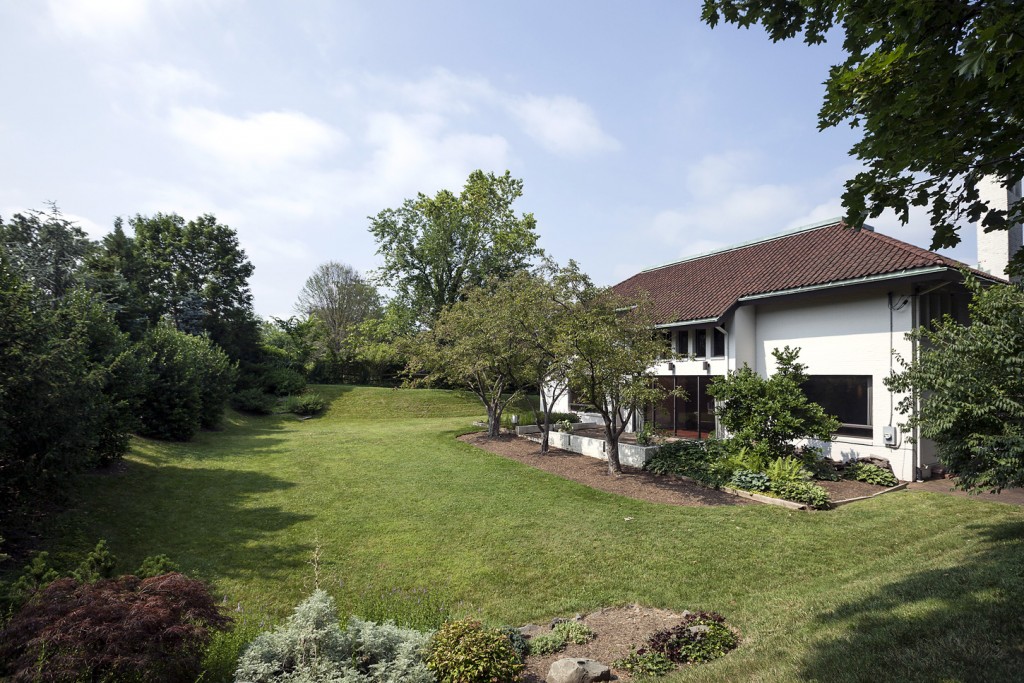 3530 Ordway Street (in a view that no longer exists), Winthrop Faulkner, 1963: noncontributing.

We should close by mentioning a special case: the William Slayton house (1960) at 3411 Ordway is one of only three private houses ever designed by I.M. Pei. It, too, is a noncontributing structure in our historic district. It is quite unlike anything else in Cleveland Park; indeed, Pei is reported to have said that Cleveland Park attracted him precisely because here he did not “feel the heavy hand of conformity” here. Fortunately, the Slayton house was individually landmarked by alert preservationists as it approached its 50th birthday. (Individual landmarks must meet a higher standard of significance than any single contributing building in a historic district.)

(This article by CPHS Executive Director Carin Ruff appeared in the spring issue of our print newsletter, Voices. The views expressed here reflect her research and are not the official position of CPHS.)

Line art in our site header is by the late architect John Weibenson for CPHS.

This message is only visible to admins:
Problem displaying Facebook posts.